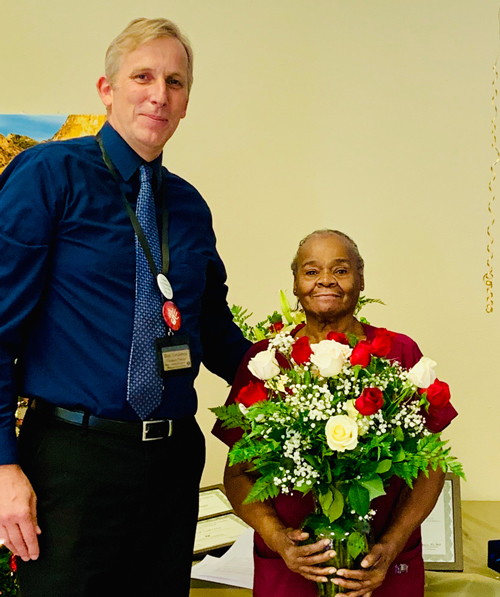 Dora has worked for Pacific Gardens for over 43 years. She has been a calm and positive presence to the staff, patients and families in the last four decades. Dora moved to California from Oklahoma in 1951. Dora lived with her aunt in a farm labor camp on the west side of Fresno. Not yet a teenager, Dora began a twenty-year stint of seasonal farm work. In 1973, a friend convinced Dora to begin working for Williams’s Laundry linen service. The business served the linen needs for three different nursing facilities, one of which was Pacific Gardens. In 1976, the facility ownership changed the arrangement with the linen service and Dora was out of a job. Dora was given an opportunity to work part-time in Pacific Garden’s housekeeping and laundry department until they “found somebody”. Not long after, ownership realized what they had in Dora, and offered her a full-time position.

Forty-three years later, Dora is still going strong. Dora says she likes the interactions with the residents she serves and that she is always learning something from them. Dora likes that she can see what needs to be done and just does it without instruction. Dora says, “I don’t mind working, if it needs to be done, just do it”. Dora says she is grateful that God blessed her with her own home and that 3 of her 4 children were able to attend college. These days, Dora is still working diligently in the facility. Dora always comes when scheduled and she always takes care of business. She is beloved by staff and residents. Seniors have been able to depend on Dora’s steadfast contribution to long-term care for 46 years.