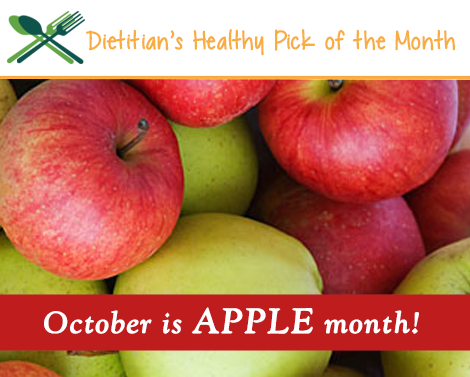 Grab an Apple and Celebrate! October is National Apple Month!

This month, Covenant Care facilities will be cooking up some tasty recipes using a variety of apples, as well as creating displays to educate our staff, residents and families. The kitchen will incorporate apples in some creative ways, from pastries, muffins, crisps, to salads, pork loin, bacon apple cheese burgers, or chicken apple wraps. This is all part of the Enhanced Dining services which includes the “Dietitians Healthy Pick of the Month”.

National Apple Month is the only national, generic apple promotion in the United States. Originally founded in 1904 as National Apple Week, it was expanded to the entire month of October. The United States grows nearly 100 varieties of apples in commercial production. There are also numerous “heirloom” varieties grown in backyards and also commercially for “niche” markets.